James Fazzino was a founding member CEO of Manufacturing Australia, well known for his passionate belief that Australian manufacturing can compete on the world stage.

During his 14 year tenure at Incitec Pivot Limited, first as CFO and then as CEO, Incitec Pivot increased in size 6-fold, with Mr Fazzino overseeing construction of two new manufacturing plants, successfully integrating the $3 billion Dyno-Nobel acquisition and restructuring the group to become a global industrial chemical company with operations around the world.

“Manufacturing has a strong future in this country. Its definitely not a sunset industry. But just as businesses must adapt in a globally competitive manufacturing sector, so too should policymakers, Mr Fazzino said.” 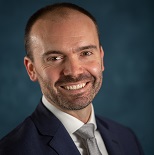 Ben has worked with Manufacturing Australia since its inception in 2011, and as Executive Director since 2013, helping the organisation to become a champion for Australia’s large enterprise manufacturing sector.

Prior to joining Manufacturing Australia, Ben’s career in corporate affairs spanned public and private sectors in Australia and the USA, where he worked in senior in house and consulting roles with government departments as well as large corporations, with focus on the manufacturing, energy and higher education sectors.